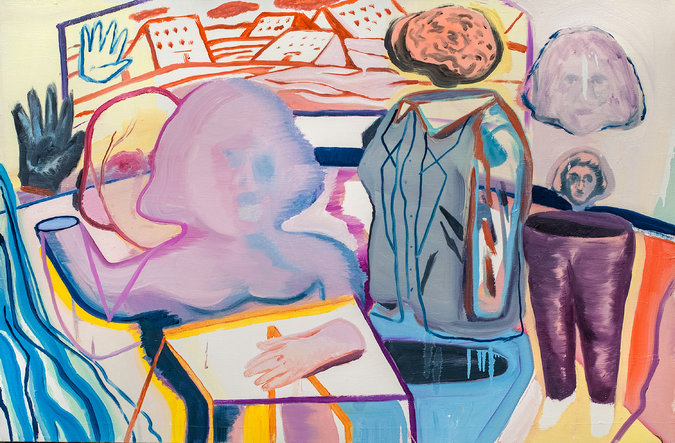 Barbara K. Lipska, a neuroscientist, is the director of the Human Brain Collection Core at the National Institute of Mental Health and this is her story …

As the director of the human brain bank at the National Institute of Mental Health, I am surrounded by brains, some floating in jars of formalin and others icebound in freezers. As part of my work, I cut these brains into tiny pieces and study their molecular and genetic structure. My specialty is schizophrenia, a devastating disease that often makes it difficult for the patient to discern what is real and what is not. I examine the brains of people with schizophrenia whose suffering was so acute that they committed suicide. I had always done my work with great passion, but I don’t think I really understood what was at stake until my own brain stopped working.

In the first days of 2015, I was sitting at my desk when something freakish happened. I extended my arm to turn on the computer, and to my astonishment realized that my right hand disappeared when I moved it to the right lower quadrant of the keyboard. I tried again, and the same thing happened: The hand disappeared completely as if it were cut off at the wrist. It felt like a magic trick — mesmerizing, and totally inexplicable. Stricken with fear, I kept trying to find my right hand, but it was gone.

I had battled breast cancer in 2009 and melanoma in 2012, but I had never considered the possibility of a brain tumor. I knew immediately that this was the most logical explanation for my symptoms, and yet I quickly dismissed the thought. Instead I headed to a conference room. My colleagues and I had a meeting scheduled to review our new data on the molecular composition of schizophrenia patients’ frontal cortex, a brain region that shapes who we are — our thoughts, emotions, memories. But I couldn’t focus on the meeting because the other scientists’ faces kept vanishing. Thoughts about a brain tumor crept quietly into my consciousness again, then screamed for attention.

The M.R.I. scan later that day showed that I indeed had a small brain tumor that was bleeding and blocking my right visual field. I was told it was metastatic melanoma and given what was, in effect, a death sentence. I was a scientist, a triathlete, a wife, mother and grandmother. Then one day my hand vanished, and it was over.

Almost right away, I had brain surgery, which removed the tumor and the blood. I quickly regained my vision. Unfortunately, new lesions were popping up throughout my brain, small but persistent. I started getting radiation treatments. In the spring, I entered an immunotherapy clinical trial. It was shortly before the end of this treatment that my brain really went awry.

It was difficult, at first, to pinpoint the changes in my behavior, because they came on slowly. I didn’t suddenly become someone else. Rather, some of my normal traits and behaviors became exaggerated and distorted, as if I were turning into a caricature of myself. I had always been very active, but now I was rushing about frantically. I had no time for anything — not even for the things that I really enjoyed, like talking to my children and my sister on the telephone. I would cut them off midsentence, running somewhere to do something of great importance, though what exactly, I couldn’t say. I became rude, and snapped at anyone who threatened to distract me. I would read a paragraph and forget it instantly. I got lost driving home from work on a route I had taken for decades. I went running in the woods outside my house, barely dressed.

Strangely, I wasn’t worried. Like so many patients with mental illness, whose brains I had studied for a lifetime, I was losing my grasp on reality.

I came up with elaborate justifications for my behavior. I had reasons for everything I did, and even if I couldn’t articulate these reasons, my certainty that they existed reinforced my belief that I was perfectly sane. I kept sending my doctor detailed emails about how great I was feeling. I was excited that I had completed immunotherapy. I felt certain that there was nothing wrong with my brain. This wasn’t just wishful thinking, or extreme denial; my worldview made perfect sense to me. I still saw myself as a scientist — a master of the rational — and was in fact still working hard on other people’s brains, not able to see that my own was crashing.

One day, when I was acting particularly strangely, my family took me to the emergency room. A brain scan showed many new tumors, inflammation and severe swelling. My frontal cortex was especially affected. I had studied this area of the brain for 30 years; I knew what that kind of swelling meant, and yet I showed no interest in the scans. Instead, I believed that my doctor and my family were scheming behind my back and making a mistake by giving in to unreasonable panic. I was frustrated that no one saw the world as clearly as I did.

Despite my conviction that there was nothing really wrong with me, I took the drugs that were prescribed. Steroids reduced the swelling and inflammation. Then the visible tumors were destroyed by radiation. I was also placed on a new drug regimen intended to kill the melanoma cells in my body. Gradually my brain began to work again. Memories started coming back, as if I had awakened from a deep sleep. I could tell the days apart. I could find my way home from work. I began apologizing left and right for my strange actions and insensitive behavior. But the more I remembered, the more frightened I was that I might lose my mind again.

The underlying causes of mental illness are rarely as clear as metastatic brain cancer. And yet I felt I understood for the first time what many of the patients I study go through — the fear and confusion of living in a world that doesn’t make sense; a world in which the past is forgotten and the future is utterly unpredictable. I had tried to fill the gaps with guesses. But when my guesses were wrong, conspiracy theories crawled in.

As terrifying as it was for me, it was even more terrifying for my family. For them it was not just the prospect of my death that was shockingly painful, but the possibility that my persona, who I was — my brain — might change so profoundly that I would, in effect, vanish before I was truly gone. Or as my daughter put it, “Mom, I thought I had already lost you.”

My latest M.R.I. scan shows that almost all the tumors in my brain have disappeared or shrunk considerably. Against all odds, the combination of treatments has been effective. I still scrutinize my emotions and behaviors, examining my mind over and over for any loose ends. It remains an obsession. But I am learning to delight in the fact that my brain works again. I can see the sunny street outside, and make total sense of it. I can ever so casually extend my arm and call my children, and they will recognize my voice and sigh with relief. I can flick on my computer, and get back to work.

3 thoughts on “The Neuroscientist Who Lost Her Mind (NY Times)”